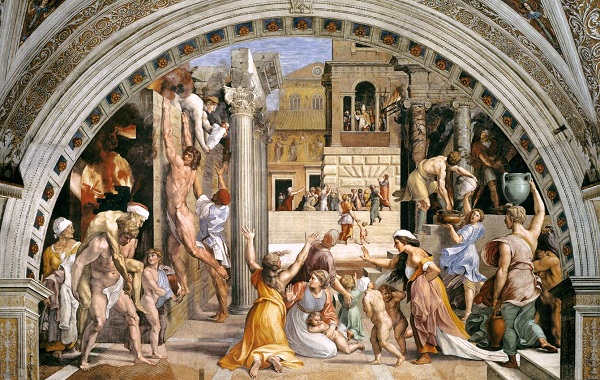 The Fire in the Borgo

Is the most complex of the four episodes. It is full of references to classical antiquity, medieval architecture at the time of the Church’s affirmation, and themes used by contemporary artists. It celebrates the intercession of the Pope, by whose grace a fire that spread through the Borgo, a popular section of Rome near St. Peter’s Basilica, was extinguished. The pope miraculously managed to stop the raging fire, which threatened an area of ​​the city, by his blessing from the loggia of Old St. Peter.

The structure of the composition is complex: two colonnades of clear classical derivation define a square. The Pope, who still bears the features of, blesses the frightened crowd from a gallery beyond the colonnades. The facade of old Saint-Pierre appears behind him, in the background. As those in the foreground desperately try to put out the fire, the female figure in yellow with her back to us begs them to look to the only effective source of help, the Pope.

The term “scenographic” can be appropriately applied to this painting. Clearly, Raphael was concentrating on richer, more varied but less harmonious compositional solutions than those of his earlier paintings. The groups of figures express great formal beauty, but they lack harmonious relationships and remain pure examples of episodic representation. The group in the foreground on the left, for example (composed of an old man on the shoulders of a young man and a child), can be taken from the episode of the escapes of Aeneas with his father, Anchises, and his son. The woman with children in the center of the fresco and the water carrier on the right, whose clothes are blowing in the wind, represent similar stereotypes. The nude descending from the left wall recalls the heroic figures of Michelangelo. Despite these limitations, the scene is highly effective and demonstrates Raphael’s skill as an illustrator, although, as critics maintain, it was executed largely by his students.