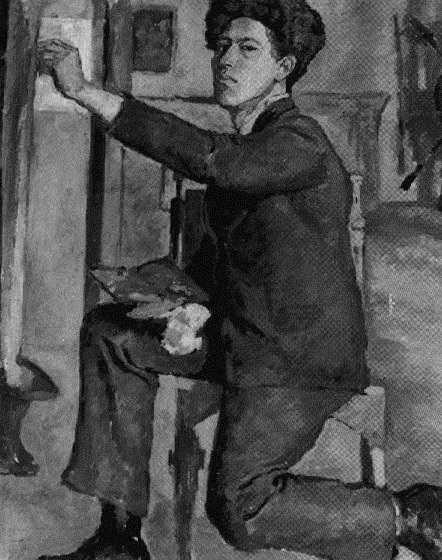 Alberto Giacometti was born on October 10, 1901, in Borgonovo, Switzerland, and grew up in the nearby town of Stampa. His father, Giovanni, was a post-impressionist painter. From 1919 to 1920, he studied painting at the Ecole des Beaux-Arts and sculpture and drawing at the Ecole des Arts et Métiers in Geneva. In 1920, he traveled to Italy, where he was impressed by the works of Alexandre Archipenko and Paul Cézanne at the Venice Biennale. He was also deeply moved by African and Egyptian art and by the masterpieces of Giotto and Tintoretto. In 1922, Giacometti moved to Paris, traveling frequently to Stampa and sometimes taking sculpture lessons from Antoine Bourdelle.

In 1927, the artist moved into a studio with his brother Diego, his lifelong companion and assistant, and exhibited his sculpture for the first time at the Salon des Tuileries in Paris. His first exhibition in Switzerland, shared with his father, was at the Aktuaryus Gallery, Zurich, in 1927. The following year Giacometti met André Masson and in 1930 he participated in the surrealist circle until 1934. His first personal exhibition took place in 1932 at the Galerie Pierre Colle, Paris. In 1934, his first American solo exhibition opened at the Julien Levy Gallery in New York. In the early 1940s, he befriended Simone de Beauvoir, Pablo Picasso and Jean-Paul Sartre. 1942, Giacometti lives in Geneva, where he joins the publisher Albert Skira.

He returned to Paris in 1946. In 1948, he exhibited solo at the Pierre Matisse Gallery in New York. The artist’s friendship with Samuel Beckett began around 1951. In 1955 he was honored with retrospectives at the Arts Council Gallery in London and the Solomon R. Guggenheim Museum in New York. He received the sculpture prize at the Carnegie International in Pittsburgh in 1961 and the grand prize for sculpture at the Venice Biennale in 1962, where he had his own exhibition space. In 1965 Giacometti exhibitions were organized by the Tate Gallery, London, the Museum of Modern Art, New York, the Louisiana Museum, Humlebaek, Denmark, and the Stedelijk Museum, Amsterdam. That same year, he won the Grand Prix National des Arts from the French government. Giacometti died on January 11, 1966, in Chur.